Sita Narrative about the Ramayana

The telling of Sita was too long to include Damsel Overcome. 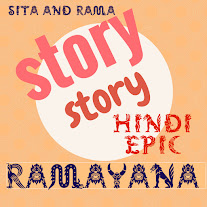 🙍 All the myths I read are about a male and his battle with the demon to be the winner. Joan of Arc got burnt for her efforts. Mary and Jesus, she is a virgin as is the mother of Buddha and even Rama's mother given sacred grains to birth Rama. So on and on we go with the woman second. Really, the damsel has power, strength, and clever tricks to overcome the male demons and his suppression. Sita's curse on the daemon from another life is Ravana's death. He did touch her to put her in his chariot. That fact seals in the story!

In the South Gallery in the Asian Art Gallery in San Francisco when I told stories to children hung a large paper mural crudely drawn by women described the life of Sita, the faithful and pure wife. Drawings like this were gifts to brides at weddings. I was intrigued and noted what scenes were there ---> marriage to Rama, her capture, throwing of jewels, in the garden, all about Sita. I think the battles with the daemon were drawn to the sides in the background. Now, I wished I had a photo.

Sita, a damsel, was the death of a greedy human daemon.